What is the Sleep Schedule of World’s Highest-Paid Celebrities 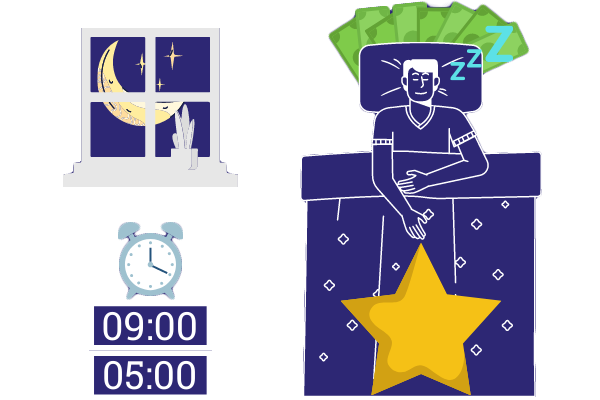 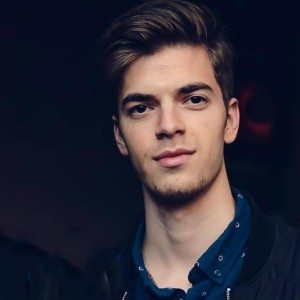 Sleep is an essential part of every person’s schedule and maybe an even more important habit for celebrities, who hustle all day long, need to look good on their many screen appearances, care for their families, and, on top of all, be energetic to keep their fans happy.

So, we studied the highest-paid 100 celebrities in the world to find out the bedtime and wake-up routines that make them so successful, see how big of a role does sleep play in their lives and maybe identify a part of the secret formula behind their fortunes.

More specifically, we looked at:

Summary of what we found 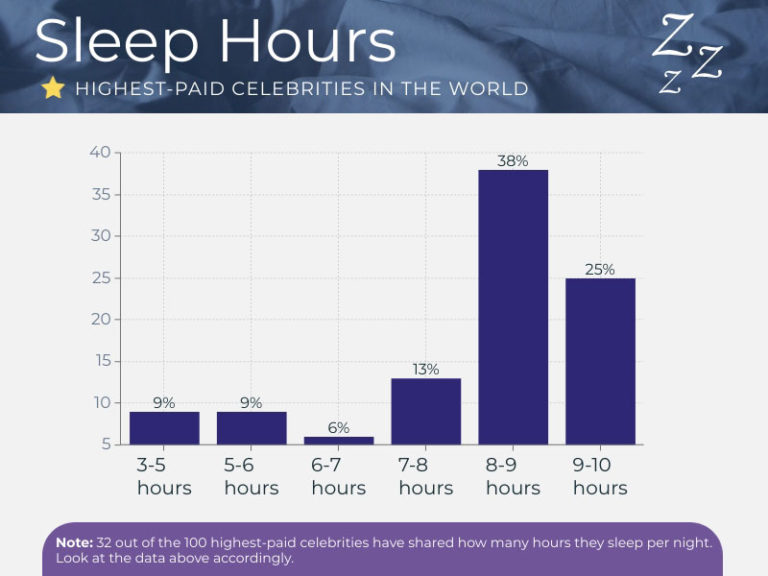 Our research shows that most successful celebrities need at least 7 hours of sleep per night. Moreover, the sweet spot appears to be 8-9 hours of sleep since 38% of the highest-paid celebs back up this interval.

Actually, about 6 in 10 top stars – like Roger Federer, Jennifer Lopez and Tom Brady – sleep between 8 and 10 hours after they put themselves under the sheets.

Obviously, if we look at the number of famous names that don’t need so much sleeping time, we will see that they are far fewer. Only 18% of the top 100 highest-paid celebrities in the world claimed they sleep 6 hours or less.

A few examples that can survive with a low amount of sleep are:

Main takeaway: most of the highest-paid celebrities (76%) need to register at least 7 hours of sleep every night to show up well in their busy worlds, which complies with the minimum recommended by the National Sleep Foundation. 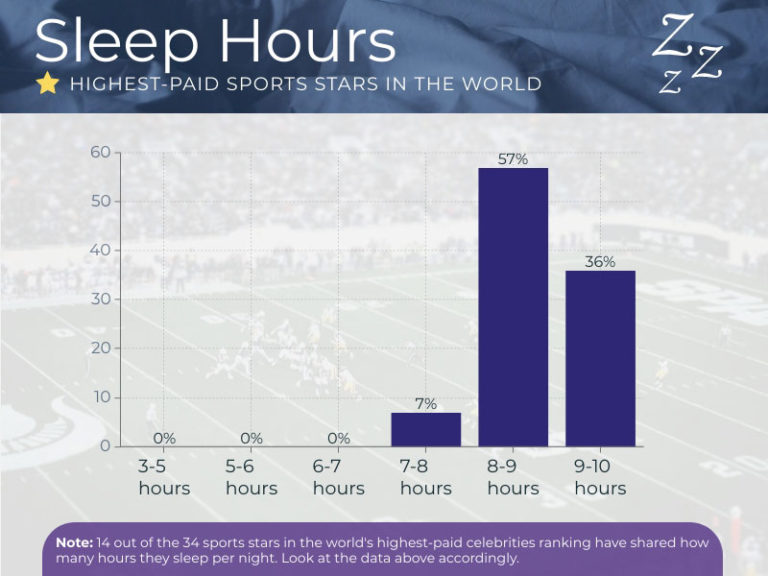 Sleep is clearly not a habit to cheat on if you’re performing in a domain that requires physical effort, as the data above shows.

All the 14 sports stars who shared how many hours they sleep per night admitted they get over 7 hours of shut eyes. Moreover, a whopping 93% of these athletes, including LeBron James and Rafael Nadal, aim for the 8-10 hours interval.

Main takeaway: highest-paid celebrities in the world of sports are very serious when it comes to their sleeping schedule as approximately 9 out of 10 sleep between 8 and 10 hours every night. 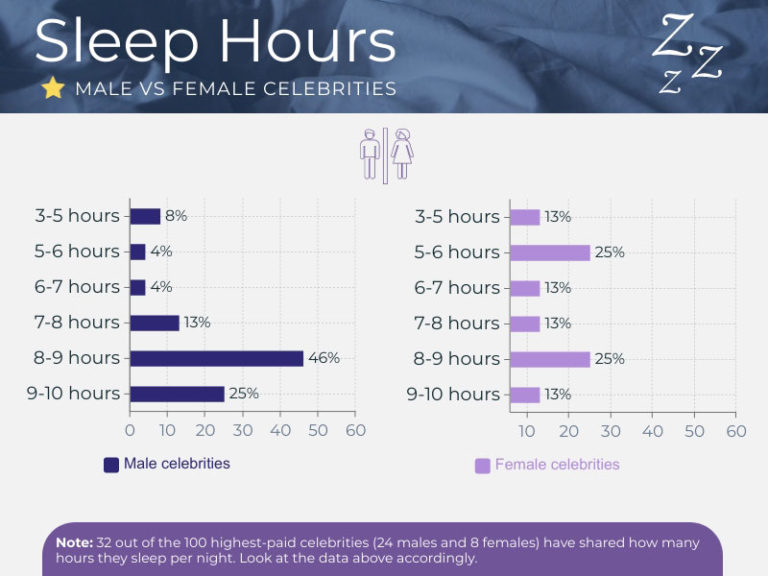 This means that 84% of the most successful male celebrities mark in their schedules at least 7 hours of night-time sleep each day.

Looking from a different perspective, not even 2 out of 10 famous gentlemen in the top 100 sleep less than 7 hours. Among the masculine celebrities who can survive with up to just 3 hours of sleep a night are Sean Combs, Dwayne Johnson, and Gordon Ramsay.

On the women’s side, stats are divided. 50% of female celebrities on Forbes’ Celebrity 100 list sleep between 3 and 7 hours per night – think Rihanna, Katy Perry, and Taylor Swift. The other half, including celebs like Kim Kardashian and Ellen DeGeneres, spend sleeping between 7 and 10 hours per night. 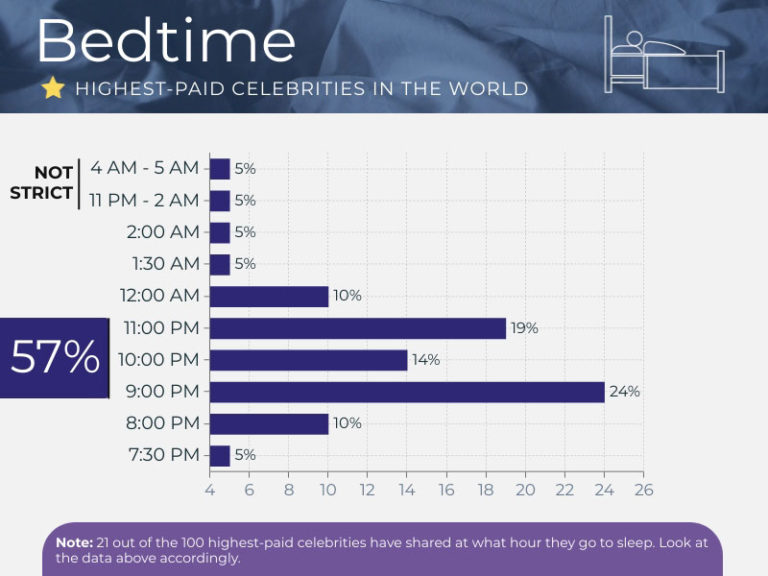 Instead, most of the celebrities with the greatest financial rewards prefer to go to bed at 9 PM (24%), the second most popular choice being 11 PM (19%).

The extreme examples here would be Sean Combs, who claims that he usually goes to bed at 4-5 AM, and Mark Wahlberg (7:30 PM).

Main takeaway: very few world-class celebrities go to sleep after midnight, most of them preferring to schedule their bedtime in the 9-11 PM interval.

Most of the top celebrities are early birds 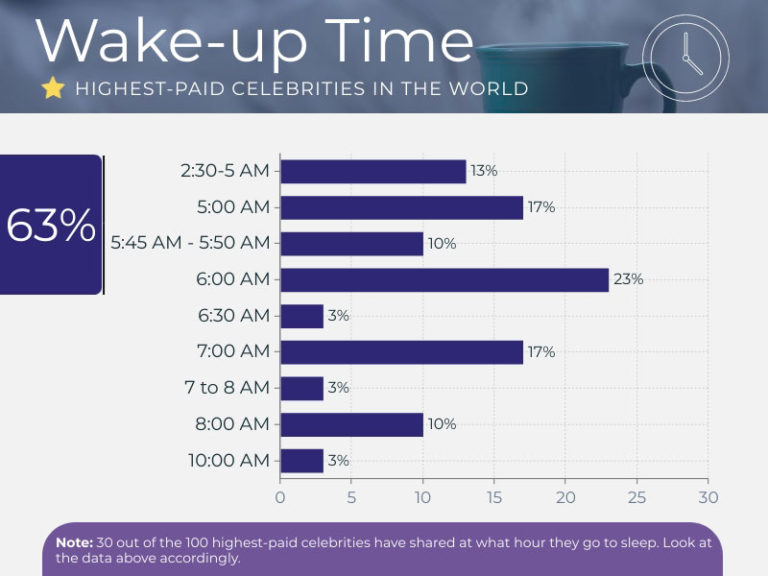 The trend that says successful people are early risers is true in the case of celebrities as well. 63% of the highest-paid celebrities wake up at 6 AM or before.

The earliest bird in our research was definitely Mark Wahlberg with his incredible 2:30 AM wake-up time. The laziest one was Sean Combs a.k.a. Puff Daddy, who reportedly gets up at 10 AM. However, taking into consideration that his bedtime is 4-5 AM, he’s not so lazy anymore, is it?

Main takeaway: the lion’s share of highly successful celebrities wake up at 6 AM or before.

Pro tip: we haven’t yet researched what celebrities do after they get out of bed, but having a good morning routine, like a yogi ritual, will help you start the day better and faster.

11% of celebrities admitted they take naps

Did you know that busy celebrities like Jackie Chan, Rihanna, and Kanye West, all like to take naps?

Actually, 11 out of the 100 celebrities included in our research have openly admitted they take naps. The other 89 haven’t shared their verdict regarding this habit of engaging in short sleeping breaks during the day, which have been linked to increased cognitive abilities.

So, it’s possible for napping to actually be a trend among the most successful stars in the world.

Yet, we discovered that out of those 11 celebs that take naps, 7 are sports stars, which actually means that 24% of the athletes in Forbes’ list admitted they take naps.

The king of naps on the Celebrity 100 list is certainly Cristiano Ronaldo, who typically takes five 90-minute-long naps during the day instead of a full night’s worth of sleep. This habit enables the multiple Ballon d’Or winner to experience as much deep sleep as possible.

Other athletes like Roger Federer, LeBron James and Stephen Curry like to take naps of about 2 hours.

Main takeaway: a tenth of the highest-paid celebrities, consisting of athletes to a great extent, embrace the activity of taking naps during the day, and more of them may be doing so. 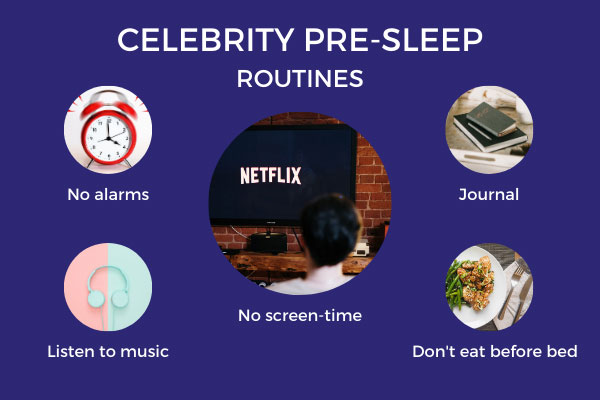 From setting their room temperatures low to listening to white noise, quite a few of the highest-paid celebrities schedule pre-sleep routines to ensure their nights are as restful as possible.

Yet, we found out that the most practiced routine is avoiding digital screens at least half an hour before bed. 5 of the 25 celebrities in Forbes’ list who have specified their before-bed habits do this. Those 5 are Cristiano Ronaldo, LeBron James, Kirk Cousins, Rory McIlroy, and Tom Brady.

However, there are also two famous names that love to watch TV before bed: Serena Williams and Kim Kardashian West.

Other celebrity-approved pre-sleep routines are:

There’s no “one size fits all” program, but considering our research we can now sketch a sleep schedule that you can adopt to ensure you align with the most common bedtime practices followed by the highest-paid celebrities in the world:

If you wish to know more, you can request access to the methodology, raw data, and sources we used in this research.

Now, I’d love to hear from you in the comments section below. Did our findings help you get more restful nights and accomplish more during the day? 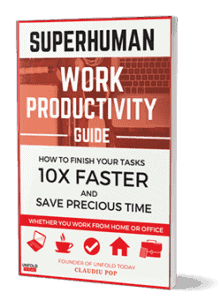 GET OUR FREE GUIDE 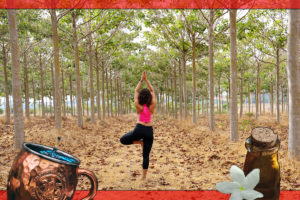 The Ultimate Yogi Morning Routine: 20 Habits for a Happy Day

21 Effective Money-Saving Habits You Can Stick To 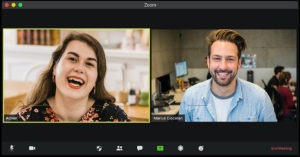 13 Guidelines to Impress on Any Video Conference

Unfold Media. The material on this site may not be reproduced, distributed, transmitted, cached or otherwise used, except with the prior written permission of the owners of Unfold Today.